Or jump right in here

The cards led Caroline to this hotel and this meeting.  She hesitated outside of the bar, reminding herself that she could back out if she wanted.  Peter, her psychic, had helped her arrange everything.  She’d negotiated, via email, everything she wanted.  Only now that she was here, she wasn’t sure if she could do it.  But the cards hadn’t led her astray yet.  So she squared her shoulders and took her first step toward the bar.

She took a seat at an empty table in the hotel bar.  It was sparsely populated this early in the day, and only two lone men sitting at the other end of the bar.

The woman who entered wasn’t what she expected.  Caroline certainly didn’t expect the woman to show up in a leather cat suit, but the petite brunette in the exquisitely tailored suit wasn’t it either.

The woman joined her at the table, “Hello Caroline.” Her voice was low but commanding.  She didn’t offer to shake hands.  She looked Caroline over, “We have negotiated your scene and limits,” the woman’s voice was cold, professional. The bartender interrupted, asking what they would like to drink.

The woman ordered a whiskey neat, some brand name that Caroline didn’t recognize.  She also ordered for Caroline, a vodka blush.

The woman began again, “You have contracted me for the evening.  You have requested corporal punishment, specifically bare-handed spanking,”

“Oh pet, you need to use your words or we can’t play.  Is that what you want?”

The woman smiled, “Good girl.”  She took a sip of her drink, “And Peter sent along two additional options for you.”  The woman smiled, and handed Caroline two cards face down.  “Peter said that you may choose.”

Caroline looked at the now familiar card backs.  She suspected she had performed half the acts in the deck with Peter or for Peter.  She hesitated to take the cards.

The woman raised an eyebrow, “You need to look, to see if you find the acts acceptable.”

Caroline took the cards.  “Did Peter tell you what happens when I look at these cards?” She asked.

The woman nodded, “I’ve worked with Peter before. But I confess, I am curious to see what happens with you for myself.  He said you have a most intense reaction to the cards.”

Caroline flipped the first card over; it showed a woman bent over, being taken from behind while another man watched. She stared at the image.  She had wanted to submit. After finding and relishing her dominance, she wanted to give up control; however, this was a more intense submission than she expected.

“Do you consent?” The woman asked?

Caroline knew the image aroused her, even if she hated to admit it.  She shifted in her seat, wondering if the two men at the bar were still present would they be the ones to use her? She didn’t know, but she wanted to give in.  “Yes,” she said softly, “I consent.”

Her Mistress looked at her from across the table.  “Stand up and bend over the table and turn your face to the wall.” She ordered.

Caroline jumped to comply.  She felt ridiculous, but she couldn’t deny how aroused she was either.  She bent over the table, resting head on her arms.

“Now, do not move.  Do not turn your head.  Stay exactly as you are.” She heard movement around the bar.  Her Mistress stood and walked behind her.  Caroline felt her flip up her skirt, and felt the air on her exposed panties.  “Gentlemen,” Her mistress said to the men at the bar, “I am going to spank my naughty slut until she cries.”  She rubbed her hand over the curve of Caroline’s ass.  “Once I am finished, would any of you care to fuck her?”

Caroline felt her face flame with shame and desire.  The idea of strangers watching her submission was something she hadn’t anticipated.  The added kink of strangers touching her, using her was terrifying and exhilarating.

Caroline heard male voices assenting to the invitation.  The she heard a sound she didn’t understand.  It sounded like cards being laid out, but why would Mistress being laying out cards?

“Gentleman, take a look at all the depraved acts this beautiful slut has engaged in.”

Caroline closed her eyes picturing all the cards the men were looking at.  She wondered if the women in the cards wore her face when they looked?

She heard a man say, “Look at the slut spread her pussy for the camera!  Even in the picture you can see how wet it made her.”

Caroline had the answer to her question.  All the images bore her face.

Caroline felt her face burn, but she also felt her panties getting wetter.  She knew any moment her Mistress would reveal just how much this was arousing her to these men.

“Of course you may.” Her Mistress answered.

Caroline felt her Mistress rub her ass again.  “Now Caroline, it is time for your spanking.”

She felt her panties peeled off, sliding down her legs.  “She likes hearing what you gentlemen have to say about her adventures,” She tapped Caroline’s leg so she would raise it, followed by her other leg.  “Look how wet her panties are.” Her Mistress said to the men.  Caroline knew that she must be showing them her sopping panties.

Her Mistress gave her ass a few preliminary swats, nothing too hard.  Enough to let Caroline know she was starting.  The first smack cracked across her flesh with a sting she hadn’t expected.  She yelped and twitched.  Her Mistress followed up by rubbing her stinging ass.

Caroline jumped again when the next blow landed, the sharp sting that seemed to radiate to her pussy.  This time her Mistress continued the spanking, landing blow after smarting blow, all while Caroline yelped and whimpered.

The men in the bar provided a running commentary on the movement of her ass and the brightness of the hand prints.

Caroline squirmed and was rewarded with a sharp rebuke and an even sharper slap.  She was in turmoil.  The spanking was wreaking havoc on her.  She was mortified to be receiving such a humiliating punishment in front of an audience, but this same predicament had her hard nipples rubbing against the table and her pussy sopping wet.

Finally, her Mistress’s blows slowed.  “Now, my little slut what do you say?”

Caroline heard herself say, “Thank you Mistress,” her voice was thick with tears and lust.  “Thank you,” she said with more confidence.

Her Mistress rubbed her sore ass, “Now, I am going to blindfold you.”  Caroline nodded, and felt the cloth slip over her eyes.  “This way these gentlemen can keep their anonymity.”  She felt the cloth tied behind her head, “Can you stand for a moment?”

Caroline rose to her feet shaky. She felt the men take hold of her arms helping to steady her.  Her dress was unzipped and fell to pool at her feel.  She felt her Mistress’s hands unclasp her bra and let it fall away.

Mistress laid a hand on her cheek and leaned close to her.  She said quietly, “You are a beautiful slut, and you took your punishment so well. 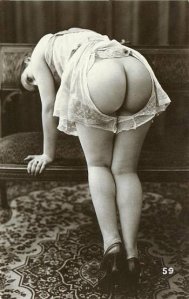 Caroline felt herself beaming at the praise.

“These men are staring at your wickedly naked flesh.  They all have erections after watching you.”  Mistress continued, tracing her thumb over Caroline’s lips.  “Ask them nicely to fuck you, and be a good girl for them.”