**To my regular readers, there is no erotica in this story

The grasses whipped at her bare legs as she made her way up the dirt path. A storm was in the air, the clouds roiled across the sky, and the wind tore at her hair and skirts. She’d heard on the radio that the hurricane had reached the coast, and was heading in her direction.

Only the desperate would be out on a night like this, but she was desperate. Desperate enough to come out in the storm and to walk this road.

At the end of the path, she held back and stood in the gloom her eyes trying to pierce the darkness. There were stories of the kind of people who came to the shrine. Practitioners of black magic and people who intended harm or hurt others for profit. She was their saint just as much as she belonged to the desperate.

The clearing was empty.

Some said that the altar had once belonged to another – to one of the ancient goddesses, The Lady of the Dead in the old language.  And whoever had built this shrine, had used the stones of the ancient ruins as the base. The statue of the saint was new, but not modern in style. The lines of the statue spoke to the ancient history in her blood. The figure towered above her, robed in shadows and darkness.

The altar was littered with offerings and candles. The wax from hundreds of petitions had pooled and dripped to the ground. Flowers and candy and even the remains of what she thought were animals littered the clearing. She found a place for her own candle, sheltered in the folds of the Saint’s stone robe.  After she lit her candle, she dropped to her knees.

The damp earth bled through her clothing, further chilling her knees.  Looking up she watched the candle light flickering, illuminating the icon.

Kneeling, she begged the Saint to protect her man, to keep him safe, to not come and collect him yet.

Her cheeks wet with tears, she gazed at the face of the Saint, struck by how her face seemed to smile in one flash and reflect a skull in another.

She wondered how many women had knelt in this exact place with the same petition.

In the distance, the lightning flashed and the clouds broke. The rain pelted her, but she stayed on her knees, whispering the prayer her grandmother had taught her.

Each lightning flash lit the clearing, while the benevolent face gazed down at her. 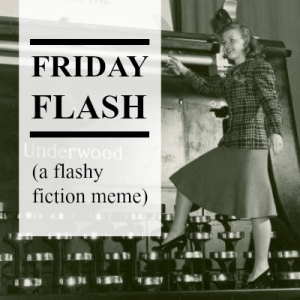