Violet sat in the front row of the lecture and forced herself to take notes. It wasn’t that she didn’t like the class on folklore; on the contrary, she was fascinated but the course.  It was just that she found Professor Crane so distracting. He offered these lectures off campus for free, and after she’d attended the first one, she’d been back for all of them. He was brilliant, and funny, and his brain seemed to wander off onto the same types of tangents as hers. 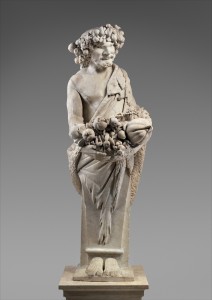 He wasn’t her real teacher, but she still felt terribly wicked fantasizing about him.

So in class, she kept her head down, hiding her face with her long dark hair. She jotted down the details about the ancient Greeks and their scarecrows. Her head shot up from her notebook when Professor Crane mentioned that the Greeks modeled their scarecrows on Priapus.

“Aphrodite’s son,” she whispered to herself, and wrote in her notebook “with the huge cock.” However, Professor Crane’s eyes shot over to her, and she felt her face burn as his eyes drifted to her notebook. She wondered if he could read what she had written.

He didn’t say anything, barely even paused in his lecture. But Carrie couldn’t stop her thoughts, imagining a field, not corn or wheat, maybe grapes – yes, she could almost smell the ripe grapes and feel the autumn sun, and there in the field, a marble statue of Priapus. It would be as beautiful as all Greek statues, so realistically crafted even the veins in his bulging cock would be visible. She imagined reaching a hand out and touching the marble, the sun warmed stone would feel almost alive.

She crossed her legs tighter, feeling her skirt ride up her thighs. She bit her lip, her eyes drifting back to Professor Crane. Of course the scarecrow has his face, imperfect as that of Priapus, but so lovely to her. Her eyes followed his slow pacing in front of the class, and lingered on his hands as he pushed a stray lock of hair out of his face. She pictured him not as the scarecrow or statue anymore, but she pictured him. His cheeks flushed with desire and a crown of leaves on his head. She didn’t bother to imagine a toga; no her Priapus would lounge nude and glorious amid the vines, with her as his nymph, devoted to their shared pleasures.

She’d stopped writing in her notebook, and had totally missed the end of the lecture.

“Did you have a question, Ms. Wilde?” Professor Crane asked packing his lecture notes away.

She blushed, knowing that she’d never ask him to act out the fantasy she’d scrawled in her notebook. She hurried to gather her things. “Oh, no thank you.” She shoved everything in her bag. “See you next week” she muttered.

It wasn’t until she was outside and at her car that she realized in her haste she’d left her notebook behind.

Want another flash? Check out Friday Flash for more stories.