Daisy knelt on the floor, waiting. 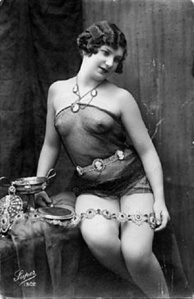 He didn’t leave her kneeling for long. When the door opened, she felt her nipples stiffen. The idea of anyone seeing her like this was so sexy. She knew she looked like the porn version of a flapper, and she knew that was what he wanted. She kept her eyes trained on the floor, wanting to look at him, wanting to know what he thought. But Daisy also wanted so much to be a good slave for him. She wanted hear him say it, but she felt his gaze on her. She risked a quick glance up, her eyes bright, maybe more noticeable with the heavy, dark eye makeup he’d ordered her to wear.

And in that second, she met his eyes and was trapped in his gaze, a gaze that went from appraising to dark and wicked in a few seconds. Daisy shivered and fought to hide her smile of delight. He’s going to punish me now, she thought and felt the rush of heat go through her. Without a word, he grabbed her by the hair, his fingers next to her scalp. He pulled her to her feet, and she teetered like a fawn in the ludicrously high heeled boots.

Daisy felt her eyes tear up, and tried to balance on her toes. Once she was stable, he released her hair, and slipped the collar around her neck.

“A slave, Sir,” she answered, her voice breaking in anticipation.

She felt the slap on her breast without ever seeing his hand more. The sting of traveled from the abused flesh to her clit in seconds. Her squeak filled the room.

“Whose slave?” his voice was cold, but his fingers were warm as they clamped onto her nipple twisting it roughly.

“You… your slave, Sir.” She moaned, and the pain was delicious.

He pointed at the padded bench.

Daisy took tiny, unbalanced steps across the room. The vinyl panties, clung like a second skin, and she wondered if liked the outline of her ass as she tottered to the bench. She knew better than to bend over before he ordered her to, and if she was too eager for the spanking, he wouldn’t give her one.

“Bend over, slut” he ordered from across the room.

Daisy bent slowly, pushing her vinyl clad ass up as she rested her torso across the bench. She turned her head to face the mirror and waited, still forced to balance on her toes.

He started with his hand, smacking her ass deliberately picking up speed and force. Daisy watched through half closed eyes, his hand against the black vinyl, her eyes tearing up and her makeup starting to run. She winced and squealed, and could feel the vinyl panties getting wet.

When he paused her punishment, he rubbed his hands over her ass and finally between her thighs. “You’ve made these panties a sticky, wet mess slave” he said his eyes on hers in the mirror.

“I’m sorry, Sir” she forced herself to look contrite and to not press her pussy against his hand, but she desperately wanted to grind against his fingers until she came.

“Sorry? Oh, my little slut, you’ll be sorry.” He pressed his hand hard against her, and she gave in to her lust, writhing against him. She kept her eyes on his the entire time. She saw the delight in his eyes as she played the brat for him. He let her writhe for a brief few seconds before pulling his hand away. “You know you’ll pay for that too.”

And he pulled her panties down; leaving them tangled around one ankle, before he forced her legs further open. Once again she watched herself in the mirror, legs splayed wide but at an angle she could not see. When he selected the crop, she didn’t bother to hide her smile. Between flinching and squealing and begging, she watched each blow and watched the red welts bloom over her flesh.

When she was crying while her hips thrust against the bench, he finally allowed her respite. Her makeup had smeared and run exactly as she thought it would. Black tears smudged her cheeks and made her eyes look even bigger. He too was looking at her makeup, taking in the visual marker of his effect on her. Then he ran the crop between her spread thighs, letting the cold leather glide through her wetness. He’ll make me lick the crop clean later, she thought as she pressed her tingling clit against the leather.

Her eyes half closed, she watched as he turned the crop in his hands and began pressing the handle into her waiting pussy. She bit her lip, further smearing her lipstick and groaned in delight as the thick handle stretched her, filled her slowly. It wasn’t Sir’s cock, but it was better than the empty need she’d suffered during the flogging.

She watched it all in the mirror, watched herself lose control. Watched as she shook and shuddered as the leather crop handle thrust in and out of her. And finally she lay panting and shivering, her thighs sticky and wet, her back and ass still hot from the beating. The crop, in his hand, was shiny and wet with her desire, and she let her eyes close.